Thesis: Physical Environment as a Conduit to Folklore 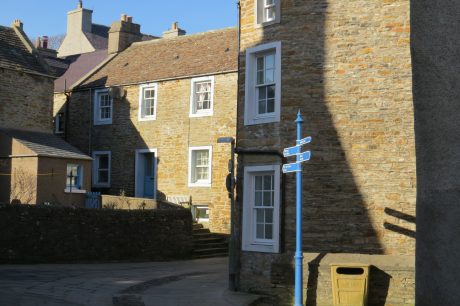 7.1 Physical Environment as a Conduit to Folklore

The distinctive physical environment of Orkney provides a rich setting for, and acts as conduit to, Orkney’s body of folklore. Harvey states that “the creation of symbolic places is not given in the stars but painstakingly nurtured and fought over precisely because of the hold that place can have over the imaginary” (1996, p.322). Orkney and the sense of place which is partially evoked through its physical environment provides an ever-present reminder of Orkney’s folklore, which helps maintain a collective memory linked to both specific physical landmarks and more general natural phenomena. The sense of liminality and isolation described by Brinklow (2011) allows Orkney as an island and Orkney as an archipelago – ultimately, Orkney as other – to weaken the division between the physical and metaphysical.

When users shared images of specific landmarks and named places within Orkney, it was not uncommon for some of the user memories to incorporate aspects of folklore in their comments. The history of such places extended beyond simply collective memory and shared historical facts, to (unsubstantiated) rumour, and ultimately to what could be considered tales of a folkloric nature. For those with a close relationship with Orkney, it seemed impossible to separate local history and local events from local folklore, supporting Simandan’s proposal that “geographers should learn to decompose human memory into its constituent parts because then and then alone will we become attuned to the full range of ways in which we incorporate places into our beings” (2011, p,23). This lack of differentiation between history and folklore is not surprising, given the extent to which Orkney’s landmarks are associated with specific and identifiable characters or tales. References were made to places with locally understood names, such as the Little General’s Mansion (Trumland House on Rousay) or Cubbie Roo’s Castle (a castle on Wyre built by Kolbein Hrúga in the mid-twelfth century) (Lamb 2004, p.57-61).

Locally assigned and understood names provide key information about more than just the immediate physical environment in which the places are based:

Not only is there a lot of local flavor in these names, but, along with their accompanying legends they also reveal something about the humor, beliefs, prejudices, and values of the people who applied the names and continue to use them.

In both name and image, elements of Orkney’s folklore are intrinsically associated with Orkney’s physical landscape and aspects of Orkney’s archaeological history. Orkney’s landscape is peppered with mounds which hint of evidence of Orkney’s ancestors (see ‘The Place Names of Birsay’ (Marwick 1970, p.33-36) for some examples of named mounds). There have been suggestions that such features of the landscape are reminders of Orkney’s Pictish history, though there is insufficient archaeological evidence to definitively support this. Over the years, these mounds have developed and maintained a clear link with other groups of characters from Orkney’s folklore: trow and hogboons. The hogboon stems originally from the Old Norse haug-búi (mound-dweller) (Marwick 1975, p.39). There are similarities between some of the traits attributed to hogboons, and the genii loci – spirits of place – mentioned within Roman mythology; and the kobold of Germanic mythology. Such creatures are found in many mythological legacies.

This link with Orkney’s past and perceived or imagined history is key to the continuing role that Orkney’s folklore plays in Orkney’s collective memory. The landscape itself is a physical, living embodiment and reminder of Orkney’s folklore, even when the landscape is marked by absence rather than presence (Knight & Harrison 2013). This isn’t just a place with a history, real, embellished, and mythical; this is a landscape whose very environmental features – whether they are naturally created or were created by previous generations – constantly serve to remind those in Orkney of its rich body of folklore. Knight and Harrison, discussing Bodmin Moor and West Penwith and the culture and heritage (specifically including folklore) of the area, state that “[c]ontemporary views of the culture and heritage of Cornwall, and their origins in a Neolithic, or a ‘Celtic-Arthurian’, or a Victorian imperial past, mirror the geomorphological palimpsest that grounds these views in the Cornish landscape. It is therefore through the lens of the landscape that culture and heritage are glimpsed” (2013, p.193). This is true, too, of Orkney and its folklore. The palimpsestual landscape (Bailey 2007) of Orkney doesn’t just remind the people of Orkney of the physical past, it continually links the physical to the metaphysical.

The treatment of the sea, the sky, and the wind as individual anthropomorphic characters in their own right is an important link to Orkney’s history of folklore. Folklore, more often mythology, has long treated aspects of the physical environment as representative of characters, personifying phenomena and environmental features. Orkney has not been immune to this key role and feature of folklore. The sea, especially, is treated with respect; and the sky and wind are equally treated as having defined character. The Mither o’ the Sea and Teran conduct a twice-yearly battle for control over the waters surrounding Orkney, at the Vore tullye, or spring struggle (vernal equinox), and at the Gore vellye, or harvest destructive work (autumnal equinox) (Traill Dennison 1995, p.20-21). Orkney as discussed online may not focus specifically on clearly defined characters much any longer, but interpretations of features of Orkney’s physical environment as some form of sentient beings with determined characteristics is evident from discussions and comments on social media.

It is clear that Orkney’s physical environment acts as a conduit to Orkney’s folklore. Much as archaeology is both contemporary and historical, tying the past to the present, so too is Orkney’s folklore and how it is discussed and interpreted. Those features of Orkney’s folklore which have been important over the years are also important now. Orkney’s folklore is respected and accepted as something which is key to Orkney’s sense of place. The importance of the sea, and its role in folklore, is an example of how the role of the physical and metaphysical combine to create and enhance landscapes – both literally and figuratively. In particular, the shore, or the ebb, is a place which is peppered with additional meaning thanks to the added value of folklore.

Gunnell discusses the nature and importance of the shore, and the effect of accounts relating to supernatural behaviour associated with such places, in ‘On the Border: The Liminality of the Sea Shore in Icelandic Folk Legends of the Past’:

The overall result of all of these accounts was that for listeners they added more than a little degree of wariness with regard to a potential walk along a beach on a pitch-black winter’s evening. In short, they added shape, character and imminent threat to an environment that was already very much alive even though it was out of sight.

The sea with its fluctuating boundaries is often considered to be inspiration for artists and creatives:

Artists reflect their physical place through their art, and there is nothing so potent as the ocean and the edge to engender creativity.

Folktales relating to the physical environment of a place tether the people and tales to that specific place. Gunnell discusses not just the shore as a vague, undefined place; but mentions specific localities where mysterious events are said to have taken place. As with mythical beings representing natural phenomena, folktales have for centuries played a key role in encouraging a certain type of behaviour, whether that is respect or wariness of specific places or actions (2009a).

As Thrift and French state: “everyday spaces become saturated with computational capacities, thereby transforming more and more spaces into computationally active environments able to communicate within and with each other” (2002, p.315). Parallels could be drawn between the way in which space is produced and a place changes in nature because of technological developments, and how folklore – specifically folktales – augment a place. As Gunnell states, “a “typical” folk narrative not only takes place in space but also creates it” (2006, p.8). When a user leaves the online environment, even if they return to experience a solely geographical environment, their understanding of the place in question will have changed, much as at the end of a performance of a wondertale when “the audience suddenly finds itself brought back “home” again, albeit to a “home” that has radically changed in character” (2006, p.13).

There is clearly still a place in Orkney for its body of folklore as demonstrated and remembered by the landscape of Orkney, whether in folktales alone or supported by specific memorates (Honko 1964). There remain those places which always conjure up a certain feeling, remind the visitor of Orkney’s collective memory, or act as warnings to the curious (to bring to mind M. R. James). Orkney’s folklore in the twenty-first century is not just accepted, but respected; and plays a key role in creating and maintaining an Orkney sense of place. Folklore is so embedded in the psyche of Orkney that it is impossible at times to pinpoint where the physical ends and the metaphysical begins.