Letter to The Courier (Perth Office) 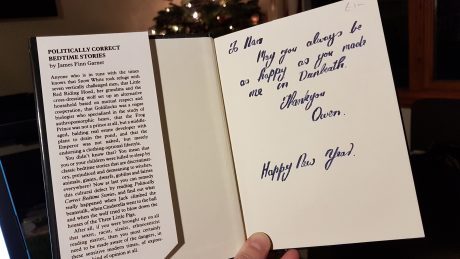 Last week, at an academic conference in Perth, my husband had his bag stolen from the drinking establishment in which he and some of his colleagues had been partaking in an evening tipple. There wasn’t too much in the bag, and I completely understand that someone in Perth was perhaps desperate to read all about the conference activity and just couldn’t help themselves from helping themselves.

We can live without the personal laptop; comparatively we don’t really care about that (puppy-chewed and taped-up cable and all). But in the bag was a copy of The Outrun by Amy Liptrot which a friend had given me as a present a couple of years ago and, in the book, was a copy of the twelve-week scan image of our first baby (due this coming January).

As much as I’d recommend everyone read The Outrun (The Man was reading it on my recommendation), I’m not really convinced that the bag was stolen to fuel someone’s literary addiction. The book didn’t even have its dust-cover (there are maybe people who travel with hardback books complete with dust-covers and manage to keep them unscuffed and neat, but they are probably the type of people who also have pristine houses and whose hair never looks out of place: needless to say neither The Man nor I are Those People), and the inscription – marking a celebration of marriage between two specific people – will mean nothing to anyone who isn’t me or he. (I am unashamedly pro-inscription: I inscribe every book I give and am always chuffed when I pick up a book in a charity shop only to find it has some intriguing handwritten note inside: one of my favourites being a book I picked up in a charity shop in Golspie with the inscription “may you always be as happy as you made me in Dunbeath”.)

It’s 2018, of course we took a photo of our twelve-week scan to share news about Blueberry / Baby Groot (name dependent on who you speak to) with family and friends. But that’s not the point: as with many expectant parents we were hoping to put aside a few keepsakes and memories for our daughter for when she gets old enough to appreciate them. A JPEG doesn’t really have the same magic.

And, worse than losing these two things, is the thought that, because they won’t mean anything to anyone else, they’ve simply been thrown out by someone who was probably a bit disappointed that the bag of a Forestry Researcher didn’t contain the limitless jewels promised to all Early Career Researchers. (Ha. Aha. Ahaha.) Because the most hurtful thing about having something so personal stolen is the thought of it just being tossed aside with no further thought.

I realise it’s a long shot that someone may come across either of these two items but, on the off-chance that someone does, it would reaffirm my faith in humankind if these could be returned to us. And, of course, if the scan photograph is returned, this will give us a grand story to share with our daughter in due course.

Yours, with hope,
Lydia Crow.