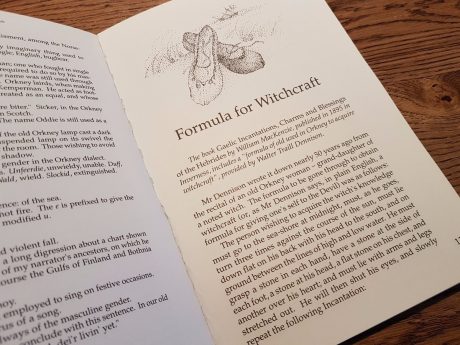 I can’t wait until I make the move to the Highlands full-time and don’t have to travel back and fore to Edinburgh every week, but I will miss the train journeys. The Edinburgh to Inverness onward extension of the old East Coast Mainline is beautiful, especially once you pass Perth and head northward into the Cairngorms and the Highlands proper.

Travelling south on a Monday morning, especially in late autumn, as it is now, I leave Inverness in more or less darkness. Nearing Carrbridge and Inverness, trees peppered with snow appear, running alongside the train; and by the time I reach Dalwhinnie, we’ve reached peak Christmas Card. There are deer, grouse, various birds of prey, and, of course, sheep and rabbits. The 0755 from Inverness on a Monday morning also takes the Stirlingshire rather than Fife route, so the rural vistas last most of the way to Edinburgh. It almost makes leaving a little less difficult. Almost. 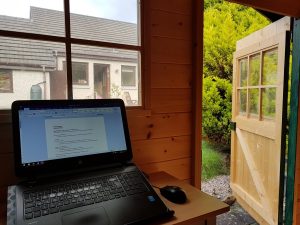 My beautiful writing cabin at the bottom of our back garden.

I turned thirty-five the week before last, and celebrated by coming down with norovirus. It took me a solid week to get my appetite and energy back and then, yesterday, my hip went out in the morning, meaning I spent the latter half of the day with pretty limiting back pain. All round, a great reminder that this year I was going to start taking good care of myself.

When I was curled up watching Christmas films under a quilt last weekend (technically, actually a duvet, but I just prefer the term quilt: it’s what I’ve always called it), I couldn’t imagine ever having the energy to finish my PhD any time soon, but since then I’ve picked up a bit and, fortunately, have made more progress in getting words on paper. One of my difficulties now is that I have made so many notes and observations in so many different files, that coming to assemble them into a logical structure – now I know the rough shape of my final thesis – is taking a long time. This is partly because my PhD has changed shape so much over the last five years. I have started and restarted so many chapters or parts of chapters and, even though the majority of all my scribbles will not make the final thesis, some of them are important and still relevant. Not quite needles and haystacks, but it feels like it’s something close at times. 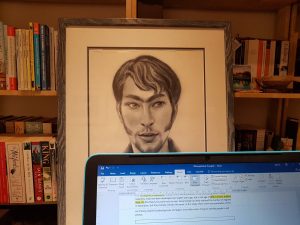 And, of course, this delays the new writing. So I’ve been pretty harsh with myself over the last few weeks. I know I could spend all day arranging and rearranging, so I’ve banned myself from doing any of that until I have churned out words. I’m playing a 500 game. I can take a break, or edit or organise, every time I write 500 words. Hopefully by Christmas I’ll have a first draft of three chapters this way. So far, so good.

November has also been full of visits from family and friends, and birthday celebrations were had at the White Horse Oyster Bar (mine) and, an old favourite, Monteith’s (not mine). Sadly, The Man and I missed out on our planned Thanksgiving with friends due to me being ill, but once I submit my thesis next year, I plan to catch up with everybody ever. Four months now. Wish me luck!

Finally, the Countdown to #Croymas has begun: not long now!