Another Month, Another Tuesday: September and a Half 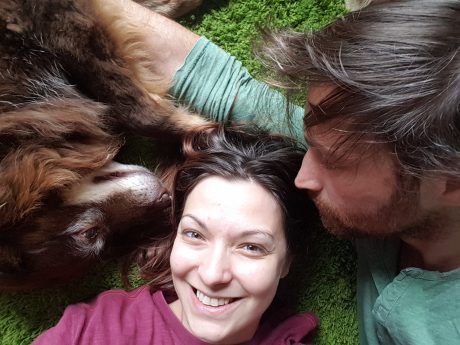 Life is speeding along. I blink, and we’ve jolted forward another few weeks with hardly time to take a breath. Still, one can’t complain.

Much has happened in the last few weeks, most of it to do with homemaking. Boxes have been packed away; furniture delivered, assembled, and mediations as to final positions have been concluded, and; much-loved artwork and kitchen implements have finally found their way to the walls. A drill has been bought. Of greater surprise, a television has been bought. And my writing cabin at the end of the garden is starting to take shape.

Behind our house, there is a wood; and we’ve been enjoying starting to explore the various paths which run through it. They will keep us busy for some time. Osa is having the time of his life, finally having his own garden. In the last week we’ve hosted dinner twice, and are planning a housewarming for early December. December? That’s only a few weeks away. As I said, life is speeding along. 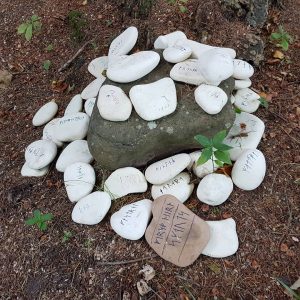 Runed pebbles beneath a tree in the wood behind our house.

Less Than Six Months to Submission

Life has also thrown up a few curiosities and surprises these last few weeks. With less than six months to submission, the theoretical underpinning of my PhD has shifted, taking a sidestep towards an alternative approach which has made presenting my results much easier; but has also left me in the position of having to effectively undertake a new literature review. Not as drastic as it sounds, as it isn’t an approach I hadn’t come across and considered as potentially complimentary some time ago; and, besides, it’s not like I had a complete, structured literature review anyway. It’s actually quite refreshing to come at it with the experiences of the last few years: I know what my results are and where my discussion is heading, so I can be so much more focussed than I was in my initial literature review (which never felt like a literature review: it took me so long to figure out where my research was heading, and which strands I was going to follow, that any attempts at producing something cohesive came much after the event of trying to absorb as much as possible from a variety of different disciplines). This last week and a half I have been on annual leave from the day-job and I’m happy with my progress on my PhD: I’m not where I thought I’d be at the end of this break, but I’m in a far clearer position, and much closer to completing my analysis than I’d envisaged. I’ll take that.

The nights are drawing in.

I think I’ll leave it here for now. November is just around the corner, and the Highland air is increasingly carrying the faint aroma of wood (and occasionally peat) smoke. I do so love autumn.

*This is possibly due to me getting married barefoot on a beach.