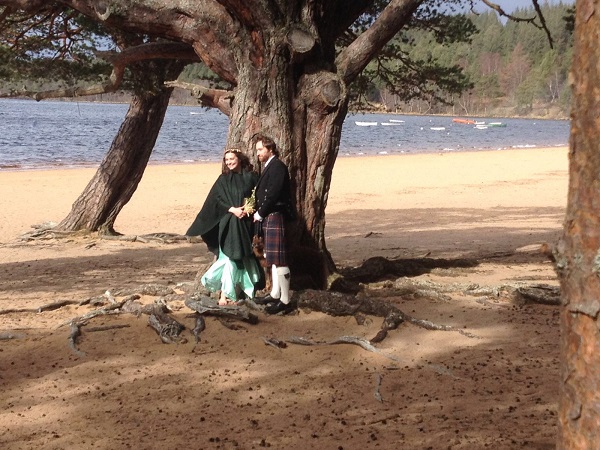 Last Friday, on the first of April 2016, The Man – Euan, my husband – and I exchanged vows in the presence of family and friends on the beach at Loch Morlich, surrounded by some rather distinguished specimens of pinus sylvestris.[1]

We had chosen the first of April very deliberately as, originally, we weren’t going to tell many people about it in advance, and we thought it would be highly amusing to let people know afterwards with the accompanying message of “April Fools!” As a day packed with folklore, I loved the idea of getting married on April Fools’ Day, and we specifically ensured that we would exchange vows before noon. 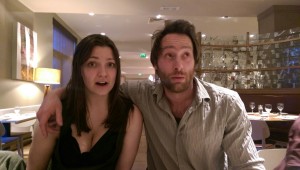 “We’re getting married in the morning.” Photo by Heather Tracey

In the very early days of discussing our nuptials, we were going to get married in the presence of only the Registrar and two witnesses. Though there were times in the planning of the day when we both in passing mentioned how much simpler that would have been (despite preparing for only a small, relaxed celebration), we (and here I am assured I can speak for my husband too, as we discussed this in a state of near-exhaustion last weekend) wouldn’t have changed our day for the world.

It was a perfect day, thoroughly enjoyed by all those present. To me, it dashed past in a delightful muddle, but everyone somehow ended up being in the right place at the right time (just).

When Euan and I first started talking about getting married, there were two things that I was insistent about. Firstly, I wanted to be married in green. Secondly, I wanted to be married barefoot. Getting married on a beach in the Highlands in the early days of spring without any footwear did raise some eyebrows but, fortunately, I avoided even the mildest form of frostbite, even if there were moments I couldn’t actually feel my toes.

Clemency, my youngest sister, made the beautiful dress I wore for the ceremony. It was a light green satin, with a belt of Fraser Modern Hunting tartan, to match that worn by Euan and members of his family (as great as Richard, my father-in-law, and Spencer, my new brother-in-law, looked in their tie and bowtie, I have to say that little Wyatt, my newly turned one year-old nephew, stole the show on that front with his bowtie). Erica, my mother-in-law, had lent me a gorgeous wool cape of forest green that worked perfectly with my dress, and of which I was rather grateful given there was a firm breeze on the beach that morning. My brother, Alexander, had carved me a wooden circlet, based on a design of native leaves; and, on the underside of each leaf, there was a character from Tove Jansson’s Moomin books. The detail of the final design, including the inclusion of the characters, was a surprise – made all the more perfect by our choice of reading during the ceremony (more on that in a moment). My wonderful flowers, from my mother and father, courtesy of The Flower Box in Grantown-on-Spey, were predominantly purple lysianthus. 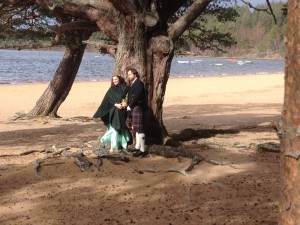 More folklore for you. “Something old, something new, something borrowed, something blue; and a (silver) sixpence for your shoe.” My mother lent me a blue-stone ring she’d been given by my grandma (which had originally been a gift to her from my granddad), which had, over the years, had certain stones replaced. Old, new, borrowed, and beautifully blue.

Heather – my housemate, best friend, and my Not Maid of Honour (as opposed to my Maid of Not Honour) – and my fabulous friend Laura gifted me an anklet made from a silver sixpence with Yggdrasil, the Tree of Life, on the other side. Me being a little short of the footwear front, Heather had woven an anklet thread to house the sixpence.

Euan sang me down the aisle. Well, there wasn’t an aisle. There were two lines of our nearest and dearest, with my now-husband in the middle at the end looking stunning in his kilt. My brother walked me to the beach, whereupon I walked myself to where Euan and our friend Wade stood playing their guitars.

The ring – made from oak and yew (of course) – was presented to us at the ceremony by little Catalina, our niece. I’ve actually been wearing it since Christmas Eve, when Euan first presented me with it. We’d already started planning our wedding day by that point, and I wasn’t expecting a ring, but Euan was adamant he was going to propose formally – that in itself is another hilarious story; but one for another time. Catalina, accompanied by Spencer, presented us with the ring, nestled (rather perfectly) on a pine cone. 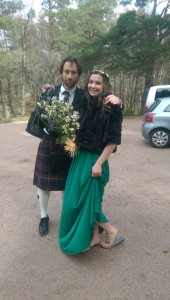 Euan and I had chosen quotes from our favourite authors, and these were read aloud by Heather and our friend Mike – alternating between Tove Jansson and Douglas Adams – during the ceremony. The formal ceremony closed with Anne Weir, our fantastic Registrar, reading a new year wish from one of our other favourite authors, Neil Gaiman.

Afterwards, there was shortbread and whisky on the beach while the more formal photographs were taken. The whisky was shared in the Quaich that Euan had bought me not long after we first met (the breaking and sharing of shortbread also had a significance in those early days). Aless, my new sister-in-law and photographer extraordinaire, was tireless in her determination to capture every element of the celebrations. I can’t begin to explain how fantastic she was throughout the whole day.

There were other, unexpected, fabulous moments. My three younger sisters turned up dressed in the house robes of Hogwarts, much to the gleeful appreciation of everyone else. As we were on a beach, we couldn’t use confetti, so Erica and Lorena (my sister-in-law), much to our joy, prepared customised sachets of bird seed for the guests to shower over us as we headed for the car. We loved it.

Though there were only thirty guests present, a sixth of those had flown from overseas to be with us – from Italy, Spain, and the States. Of course, the star of the show was Osa who joined his voice with ours during the ceremony, yipping away merrily in a slightly bemused, but content, manner.

After the beach, we headed off to the Dores Inn for something to eat. The Dores Inn staff deserve a specific mention here as everything was superb. They ferried guests to and from Inverness, and checked in on us partway through to make sure everything was going well. The service was excellent, and the food was delicious. I can’t recommend it enough.

Euan and I said a few words of thanks at the dinner. I had checked with Euan two days previously that he didn’t need me to help him compose his list of thanks, and he assured me it was all in hand. Imagine my surprise, then, when he whispered five minutes before the toasts that he thought it would be nice if we flipped between each other to lead the (apparently entirely unscripted) thanks. Thank you, dear. Further words of wisdom were given by Spencer and Heather, both absolutely spot on. It couldn’t have been more us. 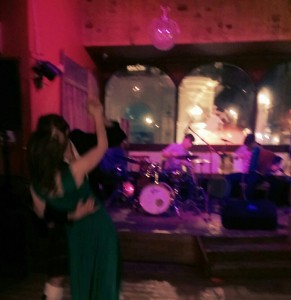 The evening saw some of us head out to Hoots in Inverness initially, with a hardy few lasting until the early hours. Euan and I shared an unplanned first dance at Hoots, after members of the wedding party notified the band on stage that we’d just got hitched; which I know was one of Euan’s favourite parts of the day. He twirled round the dance floor like a folk-esque Fred Astaire, and I – well, I mostly didn’t embarrass him. (I am an enthusiastic, but not entirely conventionally good, dancer.)

You will not be surprised, given my interest in identity, that I have given some serious thought to my name moving forward. After much debate, I have decided that I will be continuing as Lydia Crow for now – though I will be replacing the “Miss” with “Ms” (Mrs Crow being my mother). My, and our, surnames have been the subject of much debate and chatter over the last few months, with many potential suggestions being put forward (in good humour and, more often than not, tongue in cheek). Being a Crow and a Bowditch, I suggested Crowditch. For various reasons, Euan’s counter-suggestion ended up as L’B’Crowditch. Friends have suggested a variety of names including us becoming the Bow-Crowditches, the Crow-Bowditches, and (on more than one overly-optimistic occasion) us taking the surname CrowBowCop.

Much as our day was very much about the two of us in all our weird glory, our lives moving forward are equally as non-standard. Euan lives in Inverness and I live in Edinburgh, as that is where our current day-jobs are based, so we still haven’t formally moved in together. Instead, we’re continuing to split our free time between the two cities, whilst working on a more permanent arrangement where we actually get to wake up beside each other more days than not. Who knows what life has in store, but I suspect there will be some significant changes throughout the first half of 2017.

One final thing (this has been my longest blog yet but, even so, I feel like it has been a whistlestop tour of a day of perfect madness): I was going to say a few words myself at the meal, but had ruled out the majority of my speech earlier in the day when it was evident that I wouldn’t be able to do it justice. I did, however, try to present the last few sentences of my pre-planned speech. I failed. I managed to say the first half of what would have been my closing words and, slightly overcome by the moment, couldn’t finish and opted to lead the room in a simple toast to The Man instead,

Euan Alastair Drew Bowditch, my husband. The only man able to do the previously impossible: make me speechless.

[1] Despite being somewhat prolific on social media, and never being one to shy away from sharing my thoughts, this has been a rather tricky post to write. I tend to refer to Euan as The Man the majority of the time. Even mentioning his name in this blog seems oddly personal.